SunshineList.ca
A new tool to track the timeline of the Canadian housing market brought to you by the developers of SunshineList.ca.

Media coverage of the Sunshine List has focused on the annually increasing hordes of public sector employees joining the ranks of the elite (and whether the threshold to be considered as such should be increased). As we can see in the corresponding chart, this upward trajectory is seemingly immune to economic conditions:

Digging deeper into the data however reveals a different story. If we examine the chart of raises that the elite are allotted, we can see the correlation with the general economy emerge. The peaks tend to correlate with bubbly times with the troughs following immediately after. As you can see, we are now in an extended trough: 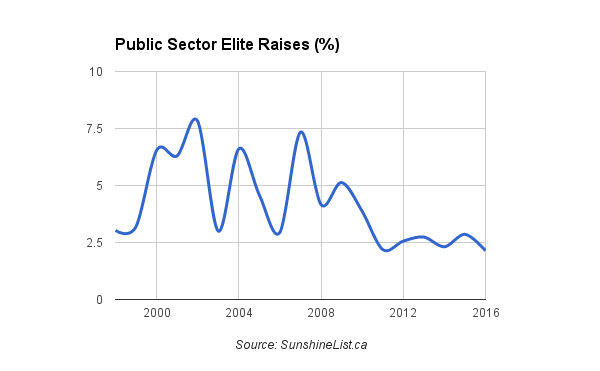 Raises are now firmly in the sub three percent range, a level it had barely broached for the 12 consecutive years prior to 2011. In this depressed environment, it will be interesting to see which individuals, employers and sectors get raises that outstrip the average. Follow us on Twitter @SunshineList for notifications of more exclusive analysis by SunshineList.ca.